We have been delighted to perform recently at the Cheltenham Library, PAVE Festival (Emerald), the Ringwood Highland Games, Mt Best Gippsland, Bairnsdale Gippsland and even an unexpected late appearance at the Australian Celtic Festival.  We look forward to performing at the Paynesville Wine Bar, Bunjil Place Library and the Peninsula Folk Club.  As well as festivals and formal concerts, we particularly enjoy presenting music that is accessible to community venues, working together with local community groups  and local government.

We were incredibly pleased to have been instrumental in this year's Ringwood Highland Games & Celtic Festival, where for the first time a tent was permanently setup up dedicated to music.  Earlier in the year, we were delighted to hear that Barbara Jeffrey had received two nominations for the Australian Celtic Awards for the categories of: Female Artist of the Year and Song of the Year (Mermaid of Zennor, co-written with Fiona Karamlidis). 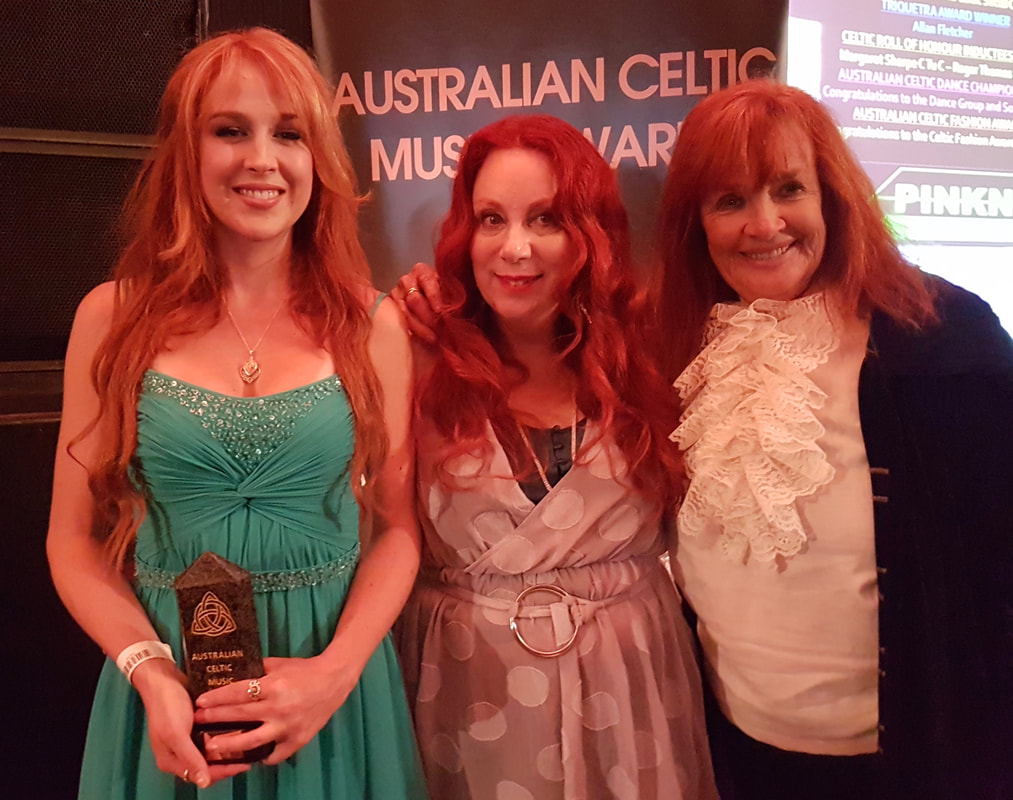 Ella Roberts, Barbara Jeffrey and Norma O'Hara Murphy
We were so very proud to have Barbara achieve the position of a finalist in the Australian Celtic Awards for "Female Artist of the Year".   So we attended the Australian Celtic Festival in Glen Innes to attend the award ceremony and also view the associated festival.  We had a wonderful time and met the other finalists in Barbara's category including Norma O'Hara Murphy and Ella Roberts.  Congratulations go to Ella, who ultimately won the award for Female Artist of the Year.

​What is tidal moon?

With strong influences from Celtic and traditional music, our music has been broadly described as nouveau folk, world music and even "genre busters".  Our music has songs that cover over five languages.  Tidal Moon's performance takes the audience on a magical and uplifting journey through a variety of musical styles encompassing folk, country, jazz, latin rhythms, celtic, alternative and original music.  We have music in five languages.    The connection between Barbara's ethereal, soaring voice and Jose's earthy baritone vocals is magical and natural - the perfect combination of music and passion.
What is Nouveau Folk?
We've been using this term in describing the genre we play because whilst the harp is known as a fairly traditional instrument, it is capable of a variety of music styles depending on how it is played and how it is accompanied.  Not all pieces sound like "tinker bell" is playing; the harp has seen its fair share of drinking halls and loud venues and is a powerful and versatile instrument.